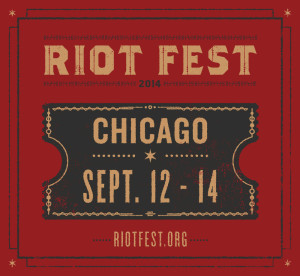 Coming to Chicago on September 12th until the 14th, the Riot Fest Chicago 2014 is gearing up to be even bigger, better, and more exciting than previous years. Held at Humboldt Park in Chicago Illinois, the 2014 Riot Festival is set to include performances by some amazing punk and rock acts including; The Cure, Jane’s Addiction, The National, Rise Against, Weezer, The Flaming Lips and so many other amazing performers.

Originating in Chicago, Riot Fest began in 2005 with an amazing punk and rock show which included performers such as Dead Kennedys, The Misfits, and The Bouncing Souls.  The attendees of the first Riot Festival were lucky enough to obtain their tickets via the event coordinator’s Myspace page.  Since 2005, the Riot Festival has grown in popularity, and in 2012, the popularity of the concert necessitated a move to a larger venue.

In addition to the amazing musical acts involved in Riot Festival 2015, there will be an awesome carnival which will include fun activities for the whole family.

For the complete list of performers visit the Riot Fest Chicago Lineup.

Where to stay while attending Riot Fest 2014

When visiting Chicago to attend the 2014 Riot Festival, the Best Western Hillside Chicago Hotel is your best option for conveniently located and affordable accommodations.

While staying with us at the Best Western Hillside Chicago Hotel, guests enjoy a location just minutes away from Humboldt Park as well as a number of other Chicago attractions including Oakbrook Center, the Brookfield Zoo, and Chicago’s historic Navy Pier. In addition to all of the exciting Chicago attractions surrounding our hotel, out guests can take advantage of our hotel’s many amenities including satellite television in each room, high-speed internet access, access to our outdoor swimming pool, and a 24 hour fitness center.

For more information on staying with us, please contact us through our website or call us at toll free: 1-888-313-6929